I've read in some books about the brain that the emotional brain will always win over the analytical brain, or something to that effect. Nevertheless, when I had an unreasonable desire to go see a rare Blue Mockingbird that was being seen in the Guadalupe Mountains (at Rattlesnake Springs), I talked myself out of chasing it for a week or more. But with no interesting birds in the Big Bend area, and even though I'm not a chaser of rarities outside the Big Bend area, I could no longer control the urge. Emotional brain won again!

I left Alpine at 4:00 AM and went for it. I had never birded in the Guadalupes before. 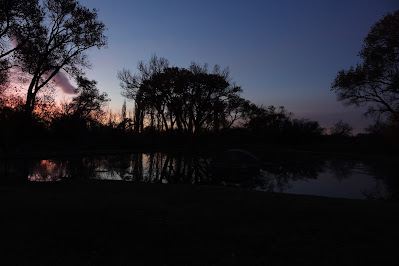 I got there at daylight (time zone change) and 32°. Had no idea where or how to look for my target bird. Rattlesnake Springs is a huge campground. I had it all to myself until a young birding couple showed up. He had a GPS location for where to look so I tagged along. When the bird didn't show up, I decided to spread out the search and headed downstream, or maybe upstream, not sure, but west, after exchanging phone numbers. After about an hour Chris Wood* texted me that they had it at the original site. I rushed over there, unaware that the bird was between us. So, getting to where they were, I more or less flushed the bird. I got one horrible shot, that I knew I had to improve on in order to feel I'd actually seen the bird and not just a bird someone pointed out to me. Here's that photo taken around 8:30 AM. 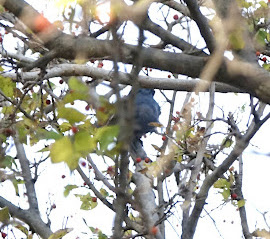 After the others, who were there before I arrived at the location, had left, I couldn't bring myself to leave until I did better. Besides, it was an awesome place to bird. I had never seen so many birds at one place. So I hung around another two hours.

While I waited, I snapped a photo of a Gray Catbird and accidentally caught it with a berry in its beak. 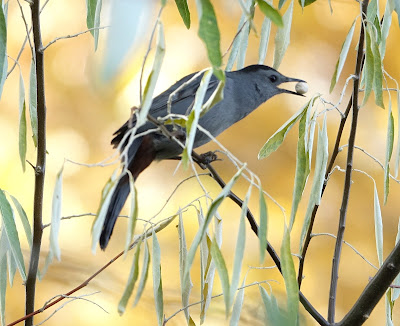 At one point I heard the mockingbird calling and even recorded the call, but couldn't locate it. Finally, around 10:30, I decided to give up. As I began working my way back along the creek, I heard it, then briefly located it, in a different hackberry tree. I love hackberry trees even more than I had previously loved them, although they don't seem to attract the birds nearly as much at my oasis. I managed a couple of slightly better shots. Not what I would have liked, but not willing to wait around longer with a long drive home ahead of me. 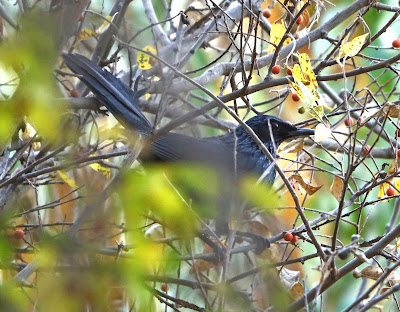 I'm so glad I went.  It was so worth it!  I'd do it again, but I'm adamant that I will not chase rare birds any farther away from home than that! I got back to Alpine around 3 PM, exhausted, but happy. 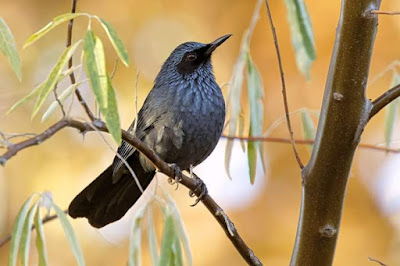 Hearing about an easy-to-find lifer Black-legged Kittiwake at Balmorhea Lake, I couldn't resist the urge to go see it. It was hanging out right where others had been seeing it. 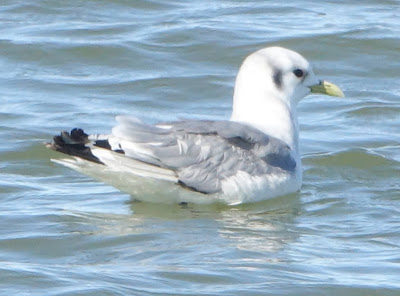 The lake was very birdy. It's to birders what a candy store is to kids.

A real fun morning! Just wish I could last the whole day. I haven't been able to bring myself to go after the lifer Blue Mockingbird that's been seen in the Guadalupe Mountains though. I think I would if I knew it'd be a sure thing.
at 9:07 PM No comments:

Arrived at the oasis today to a lovely day. Couldn't resist rearranging some rocks. The good news is that the javelina haven't bothered the water feature since we put that real heavy rock on it. Hoping the weight of that rock won't damage the underground plastic structure of the reservoir. 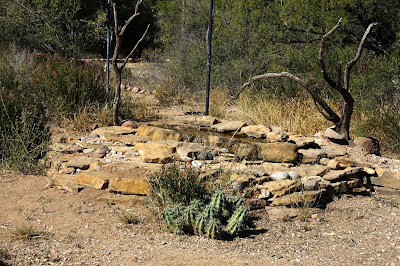 I managed to tally 25 species of birds today. The Rufous Hummingbird was gone, and an Anna's had arrived. It took me until just before dark to get a photo of it. 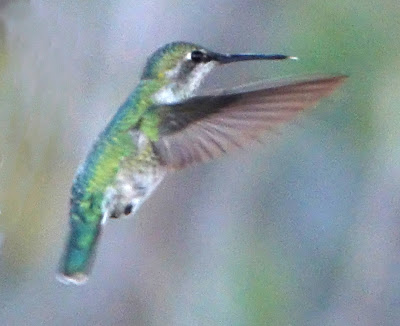 The fading light wasn't good for bird photography, but made a lovely afterglow on the mountain. I never tire of seeing that. 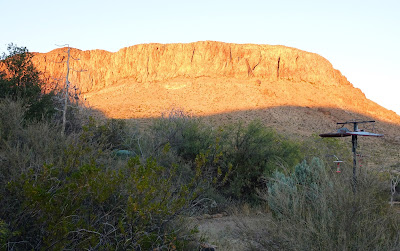 I watered today even though it could have waited a few more days, but the weather is just so great! First thing this morning I saw two Phainopeplas, male and female. 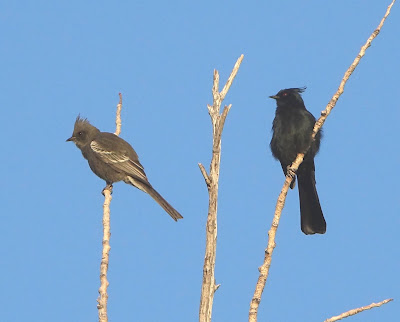 Later I saw a Cardinal that I first saw yesterday but couldn't get a photo of yesterday. 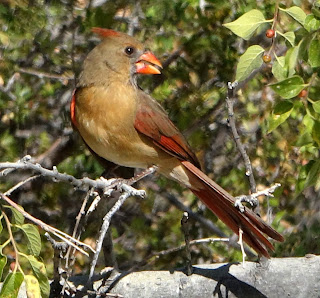 I tweaked a bit on the water feature. Looking better to me, but want to do a little more to it yet. Mostly, I just want to camouflage that rock my sisters put on recently so the javelina can't root around. 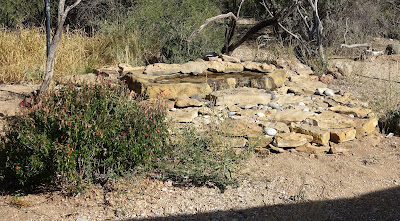 I was shocked to see several White-crowned Sparrows splashing so vigorously in the water feature that the whole area got soaked. Hadn't figured that into the water usage situation. 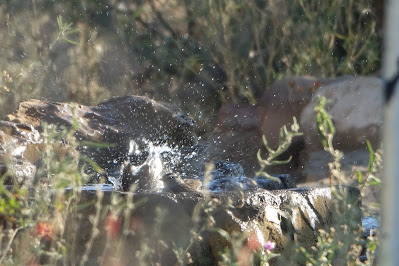 Surprised to see a Powdered Dancer this late in the year. Things are real slow. Have to work at tallying 20 species of birds every day. 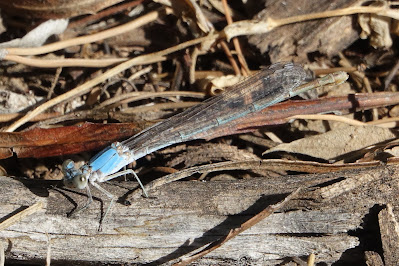 Couldn't stand to sit in town another day, missing out on enjoying the lovely weather, so came to the oasis. Nothing much going on here. The best thing was seeing Phainopeplas at the mistletoe berries. I've never gotten a photo of one with mistletoe berries in its beak, although I've been wanting to forever. Maybe tomorrow! 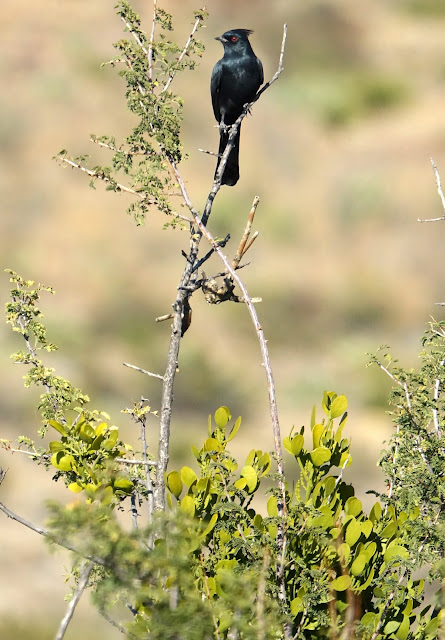 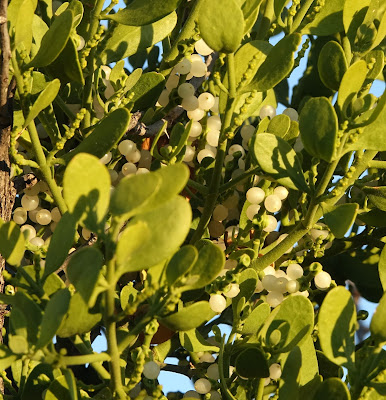 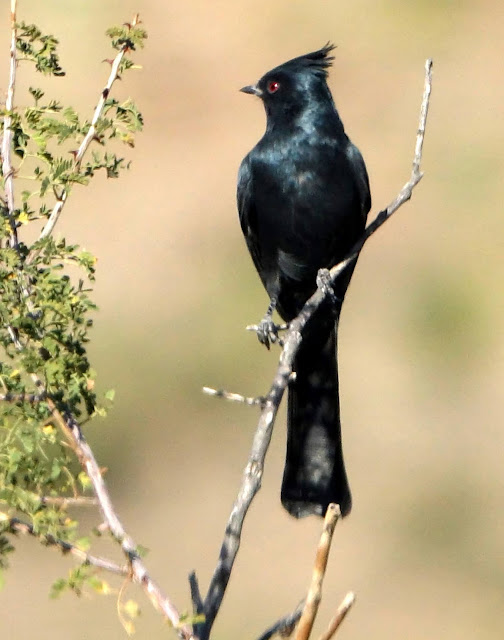 Dragging as fast as I can

Got up this morning to my windshield iced over. Had to scrape it to see through it 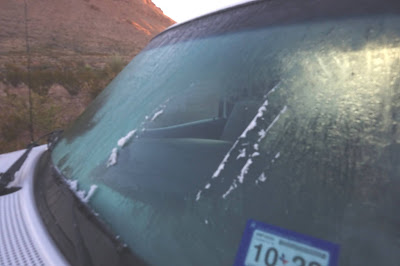 It's frustrating that my place seems to get the coldest in the Big Bend outside of Marfa. I'm on a little finger of the Marfa Plateau. Then in the summer, I'm almost as hot as anywhere in the area. Not only that, but the mountains usually block me from Gulf of Mexico moisture. And no underground water under my property as far as I can discern. Talk about making lemonade out of lemons!

Did not see the Lewis's Woodpecker today. And even though I saw the Gray Catbird, I couldn't get a photo of it. Maybe if I could have sat in the viewing blind for hours, but I needed to get the watering done. I guess the best photo I took today was of a Northern Flicker. It perched on my pickup just outside the guesthouse (my cabin, now) window. Even taken through the window it got pretty good. 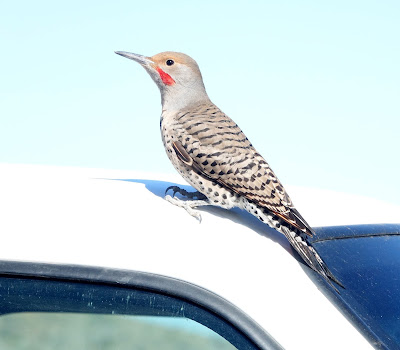 Before I headed to town I was determined to fix the water feature so javelina will stop moving the rocks off the underground reservoir. My plan was to put a rock where they root that would be too heavy for them to move. But that meant too heavy for me to move too. So my wonderful sister and her daughter came to the rescue. Hope that solves the problem. The new rock is right where the water runs over the basin. I want to put more weight on that basin too. I think it weighs like 35 lbs. However, I don't see how they can get to it to root it up. It would take a lot of determined effort. Everything, including life, is a work in progress. 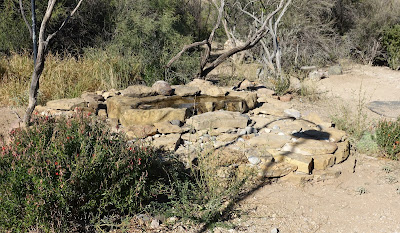 Not as pretty to look at, but when I have more energy I'll beautify it some. I've been puny for a week now, and after watering today, my vertigo got worse and I got a headache. A week ago I felt good, so washed the car and cleaned the house. Nothing major and it didn't seem to wear me out, but the next day, and since, I've been real run down. Cold sores in my mouth and on my lips, etc. I'll try to rest up for a few days now.

Got to the oasis around noon today but it was so chilly that I decided to fix myself lunch and wait for the sun to come out. Around 2 PM or so, as I was entering the oasis parking area I saw a large-ish dark bird fly from a perch near the viewing area to the big cottonwood tree. As it flew, I thought maybe a Common Grackle. It looked black. But when it landed, it clung to the trunk, so I knew it was a woodpecker. Then I thought "gotta be a Williamson Sapsucker," but as soon as I got my binoculars on it, I saw it was a rare, to the Big Bend area, Lewis's Woodpecker. It was too far away for a good photo, but I snapped what documentation I could. Then creeping closer for a better shot, it disappeared. However, it hung around the rest of the day, so I got a slightly better shot. I'm hoping it'll be here tomorrow for anyone needing it on their county list.

I already had it for Brewster County. In 2013 one was at Mile High Road. It stayed there for quite some time, so I'm cautiously optimistic here. I don't think there are any acorns left, but there are still some pistachio berries. 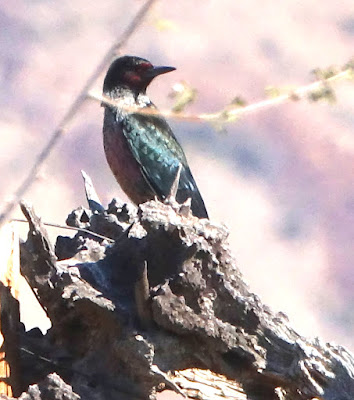 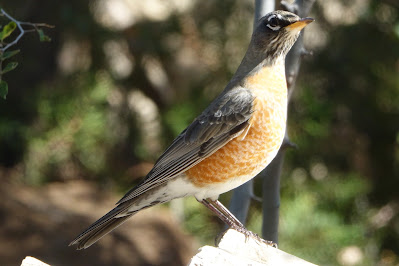 I heard a Gray Catbird, but did not see it. Maybe tomorrow. A visitor here on Monday got a photo of it at the new water feature, which was really cool.
at 5:25 PM No comments: 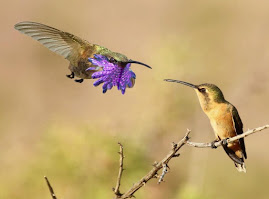